There was a time, merely a few days ago, that Tottenham looked like they’d secured their new manager.

The Premier League club have been searching for a long term solution since they decided to part ways with Jose Mourinho, and there’s been a string of men linked with the position.

Against most odds, Antonio Conte seemed to be edging towards the position, and then there were reports of a breakdown in talks and little chance of them rising again.

That saw reports about a possible Mauricio Pochettino return to Tottenham rise again, and these claims aren’t going down well in Paris.

Pochettino replaced Thomas Tuchel last season, with the latter going on to win the Champions League with Chelsea, and PSG aren’t thrilled about claims their manager is unhappy and could be moving back to Tottenham this summer.

Nasser Al-Khelaifi, PSG’s president, has granted a lengthy interview to L’Equipe, and was naturally asked about the rumours around his manager.

“It is quite the opposite. He was totally involved in the subjects: the club, the structure, the organisation, what he needs for next season… He talks almost every day with Leonardo (sports director of PSG) about the transfer window, players, etc. This situation 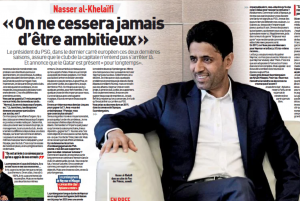 really upsets me, it’s not right. He’s been there since January, he still has two years on the contract, he’s our coach. For him, as for Mbappé, people are trying to disturb us.”

Al-Khelaifi went on to insist PSG will not be divided by outside rumours, and seems convinced Pochettino is staying.