The 27-year-old has lost his place at the Etihad and was restricted to 14 league starts and made three more starts in the Champions League last season.

It’s claimed the relationship between the La Liga side and the English champions was not good during Josep Maria Bartomeu’s time, but that has changed after Joan Laporta became the president of the Camp Nou side in March.

The good ‘feeling’ between the two clubs has led them to explore the possibility of carrying out a two-way operation this summer, involving Laporte.

At the moment, the Catalan club will have to do a lot of work, but the ‘intention is to deepen the understanding’. 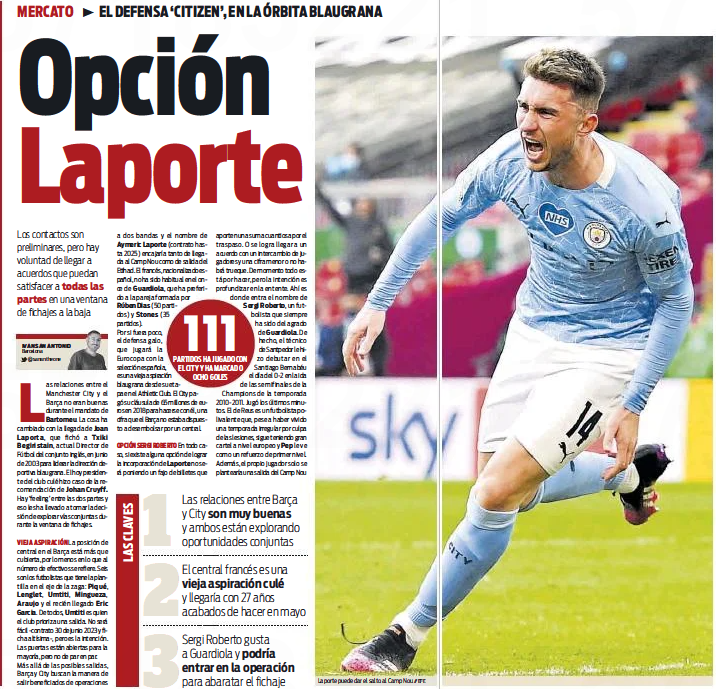 If Barca are to sign the newly capped Spain international, it will not be by paying a huge fee. It’ll be done most likely by offering a player in exchange to Manchester City, and a lower fee.

This is where Sergi Roberto, who has a contract until 2022, comes into the picture. The versatile Barca player has ‘always been liked’ by Pep Guardiola. He could be sent to the Etihad, which could allow Laporte to move in the opposite direction.

Sport state ‘there is a will to reach agreements that can satisfy all parties’, but the ‘two-way operation’ is still in its early stage.

Mundo Deportivo on Monday also explain Laporte has been identified as one of the centre-back targets for Barcelona this summer.

The newspaper states it won’t be easy to take the former Athletic Club Bilbao man away from the Etihad, unless a player from the La Liga side enters the deal.

Mundo are of the belief offering Roberto to City may help them to sign Laporte.