Barcelona star Sergio Busquets has heaped praise on Pep Guardiola as the midfelder continues to be linked with an unlikely move to Manchester City.

“With Pep you do a Masters in everything. We spent a lot of time training tactically. He was always very methodical,” Busquets told beIN LaLiga’s Universo Valdano, as relayed by Sport.

Catalan newspaper Mundo Deportivo reported this morning the Spain international had informed Barca’s board two months ago ago that he wants a pay rise.

Busquets once again approached them and Barcelona have now informed him that they are not willing to focus on giving him an improved deal right now. The Spaniard’s situation at Camp Nou has put City and Paris Saint-Germain on alert.

Busquets played under Guardiola in Barcelona’s B team, a year before being promoted to the first team in 2008. The current Manchester City manager handed the midfielder his La Liga debut at the Camp Nou. Since then, the 29-year-old went on to become an integral member for his club and country.

He has won every tournament with club and country, starting from the league titles to the Champions League with Barcelona and European champions to the World Cup with Spain.

Busquets stressed that because of his position and overall game, he is not considered for individual honours.

“It’s true that my job is to make the rest better. To play in a position that in terms of media coverage and level of play is not so spectacular, makes it harder for you, but I wouldn’t change for anything. I prefer collective titles to individual ones,” he said. 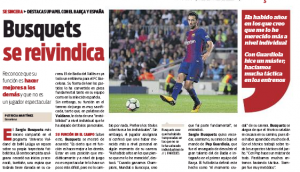 “[However] there have been years in which I think I have deserved them. When we won the Champions League, World Cup or the Euros, I think I was a fundamental part.”

The midfielder sounds like he feels undervalued, and the Manchester City rumours may not be a coincidence. That’s not to say he fancies a move to the Premier League, but Busquets may help oil the wheels to pressure Barcelona.

Manchester City make ‘final sprint’ to get player ahead of Real...