Matteo Darmian stories come every day in the Italian press, but usually it’s been Tuttosport leading the way.

The Turin newspaper has had the player’s move to Juventus as being pretty much done for a while, saying it in every way they can possibly think of… and then saying it all over again.

Tuesday’s edition of Gazzetta dello Sport has a big feature on Juventus transfers this summer and of course it mentions the Manchester United player. It’s stated Darmian has agreed to join the Serie A club, but only verbally.

The manager hasn’t given his approval to the sale yet, so Juve haven’t even been able to find out a price. It’s blocking everything right now and the likelihood is Mourinho wants to be sure of his incomings before he lets anyone out, that would fit in with the manager’s comments recently. 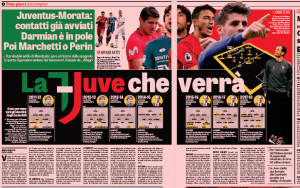 Ed Woodward needs to get to work to unblock the situation, and allow Darmian to make a move which has been edging closer for over a year.

It’s a similar situation for Anthony Martial, according to Gazzetta. That goes against the usual Tuttosport claims of Mourinho already giving his nod to the Frenchman’s exit.

“We needed to talk to each other” – Player on controversy...