Sergio Busquets signed his last contract extension at Barcelona in September 2016 and his current deal at Camp Nou will expire in 2021.

Mundo Deportivo reports the midfielder informed the Catalan club’s board two months ago that he’s looking for a pay rise. He’s once again approached them and asked them to fulfil it, something Barcelona are unwilling to fulfil now as their focus remains elsewhere (On securing Samuel Umtiti’s future).

The Catalan newspaper also claims Pep Guardiola’s Manchester City and Paris Saint-Germain would be interested, if Busquets makes a “gesture about considering his future” at Barcelona.

In 2016, the Spain international had admitted that only his wife and Pep Guardiola can convince him to leave Barcelona.

“My wife is from here and is a Barça fan, so I don’t think there would be a problem on a personal level. In footballing terms, that other person is Guardiola. I obviously owe him a lot and it would be an honour to play under him again,” he said.

Busquets’ agent Josep Maria Orobitg is aware of PSG’s interest, who have followed him for years. However, the midfielder’s desire to play under Guardiola could make it difficult for the Ligue 1 outfit in signing Barcelona star in the unlikely event he leaves Barcelona. 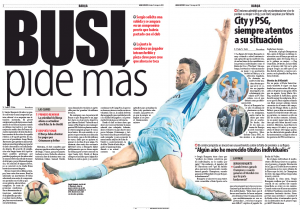 Manchester City are said to be ‘attentive to his situation’, but there’s nothing more than that.

This just seems like Catalan fretting. Busquets to City has already been reported as a possibility by someone else in Spain this year… Don Balon.