Former West Bromwich Albion forward Nacer Chadli has insisted he does not look back on his time at the club with any regret.

The Belgian forward joined the Baggies in a £10m deal from Tottenham back in 2018 as Tony Pulis looked to add some extra firepower to his forward line.

He made a flying start to life at the Hawthorns, scoring five goals in his first five games and looking like a bargain signing for the Baggies.

However, that form quickly tailed off, with Chadli managing just one more goal that season and enduring a three-month goal drought in the middle of the campaign.

His second season at the club was then ruined by a series of injuries, limiting him to just six appearances in all competitions. 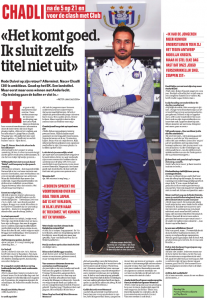 Chadli has no regrets about that damaging spell, though, insisting his time at West Brom only helped his career, particularly in terms of international recognition.

“I was very happy until my injuries in my second year,” he told HLN.

“I made a lot of progress there. I learned to defend under Tony Pulis, which helped me to become a starter in the national team. I don’t regret West Brom.”