Home Europe “Not my issues” – Player explains why transfer from Man United to...
SHARE

Javier Hernández left West Ham United and completed a switch to Sevilla on deadline day of the European transfer window.

The striker opened his account for the Spanish side as he got his name on the scoresheet in the Europa League victory over Qarabag. He will face his former club Real Madrid in La Liga on Sunday.

During the 2014/15 season, Manchester United allowed the Mexico international to join Los Blancos on a season-long loan deal.

The 31-year-old was restricted to only 12 starts in all competitions during his time at the Spanish capital club and found the back of the net on nine occasions, also making nine assists.

AS interviewed the frontman and asked why he didn’t move to Santiago Bernabéu on a permanent deal in 2015.

“I was on loan and Manchester United and Real Madrid did not agree [for permanent transfer]. Policy things, they were not my issues,” he said.

Since then, Hernández spent two years each at Bayer Leverkusen and West Ham before arriving at Sevilla. 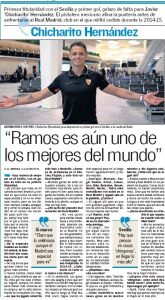 Despite not managing to join Real Madrid on a permanent transfer, the player is not disappointed with how his career has progressed.

“I think I have had a good career since then and now in fact I have returned to La Liga and another important club like Sevilla, which was one of the things I wanted,” the ex-Hammers man explained.

Despite Hernandez claiming the reason for the failure of a permanent deal was negotiations between Manchester United and Real Madrid, at the time the Spanish media made it clear that wasn’t a great deal of interest from Florentino Perez and co.