Among those widely expected to leave Watford following their relegation to the Championship, Roberto Pereyra has taken a bit more time to find himself a new club than first thought.

In the end, it’s a return to where it all began for the Argentine, as multiple sources in Italy widely expect the playmaker to end up at Udinese next season.

We’ll start with local newspaper Messaggero Veneto, who explain the decision was taken on Thursday by the Pozzo family ‘on the return of Pereyra’ to the Serie A club, bringing a ‘guarantee of quality, quantity and experience’ to the club.

Sevilla showed some interest, but the Italian owners decided to take him off the market, thus ‘giving new life to the synergy with Udinese’, and the midfielder’s arrival is ‘expected shortly’ with the prospect of him ‘being used as early as next Wednesday’s home game against Spezia’. 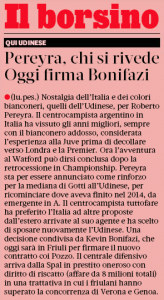 This is echoed by Gazzetta dello Sport, who explain Pereyra ‘is going to be announced as a reinforcement’ by the Serie A side, revealing he ‘preferred Italy to other foreign offers that arrived on his agent’s desk and decided to marry Udinese again’.

There’s no indication of the price, but considering it’s an Udinford transfer (a term coined by Messaggero Veneto a few days ago), it wouldn’t be a surprise if this was comfortably facilitated at a low fee.