There was a brief period, about a couple of weeks ago, when Marko Grujic to Lazio started to pick up some pace.

A number of outlets in Italy were running the story, claiming the Serie A side were considering making a move for the Liverpool midfielder to replace the most likely departing Sergej Milinkovic-Savic.

The idea of a loan with a view to buy was thrown around after the Serbia international impressed on loan at Cardiff last season, earning himself a spot in his national team at the World Cup in Russia.

With their run in the competition now over, transfers involving the pair can now take place, after some much needed rest. 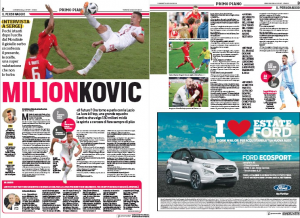 This is what Milinkovic-Savic told Corriere dello Sport on Friday, where he was also asked about Grujic’s future, and whether or not he’d spoken to the Liverpool starlet about a possible reunion in Rome.

He said: “Obviously, I told him all the great things about Lazio, and that if he came here he will surely do well. Now it’s up to him to decide.”

The story involving the 22-year-old has gone a bit cold lately, perhaps due to his involvement in Russia, but if Lazio are still interested, we can guarantee you the rumour of him leaving Anfield will make a resurgence in the coming days.

Jürgen Klopp doesn’t seem intent on including him in his first-team squad after the capture of Fabinho and the arrival of Naby Keita, so he might as well go play football elsewhere.