Leicester City manager Claude Puel is being considered for the vacant job at Portuguese side Sporting, according to claims from Lisbon today.

Newspaper A Bola reports the Frenchman is on a list of potential managers, with an appointment expected before Monday.

The outlet claims that Puel is not ‘in a very safe situation’ at Leicester City, so despite having a contract with the Foxes, it’s thought he’s a real possibility for the Lisbon side.

Sporting’s priority for now would be the return of manager Jorge Jesus, who left because of former club president Bruno de Carvalho. If the club fail to bring the old boss back, then they’d go for Puel. 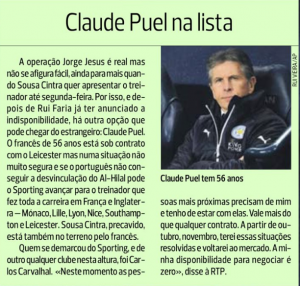 A Bola is the only Portuguese outlet who links Puel to the job. We’ve read at least four other newspapers this morning, and none of them mentions the Leicester City manager.

Former Chelsea and Manchester United assistant coach Rui Faria is being mentioned in most of the stories, alongside the former Tottenham Hotspur manager André Villas Boas.