Home Europe From Italy: Grujic to Lazio is big news, has spoken to Inzaghi,...
SHARE

Marko Grujic to Lazio has managed to become a fully fledged story in less than 24 hours.

TuttoMercatoWeb were the ones who started it all off with an exclusive on Monday, simply stating the Serie A club had ‘set their eyes’ on the Liverpool midfielder to potentially bolster their squad next season.

It appears that news has since travelled all around Italy, so here’s a quick round up on what’s being said.

Gazzetta dello Sport believe the interest is there, and that Liverpool would be willing to sell at around €6-7m.

Over in Rome, Il Tempo also confirm the interest from Lazio in Grujic, stating he’s already spoken to Simone Inzaghi, and that a transfer could take place at around €5m. 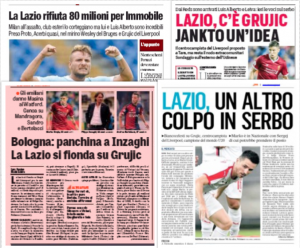 Still in the Italy capital, Il Messaggero are the ones who make the biggest deal out of it, dedicating their whole Lazio section to the transfer, and believe the idea would be to loan him with an obligation to purchase next summer for around €5-7m.

The local newspaper make it clear their information comes from Serbian sources, as the Italian club’s director of football, Igli Tare, denied such an interest exists.

The only issue they see standing in the way of this transfer is the fact the midfielder would take up a non-EU slot, which Lazio are currently short of.

The Serbian starlet spent last season on loan at Cardiff, where he enjoyed himself, and while he will now be returning to Anfield, it remains to be seen whether he’ll manage to make a spot to himself in Jürgen Klopp’s plans.

As you can see, there’s a strong belief in Italy this could actually become something real, so rest assured that we’ll be keeping an eye on things over the next few days.