On October 11th, Barcelona general manager Pep Segura admitted it is “not a necessity” to tie down Jordi Alba to a new deal since his contract runs down in 2020.

At the end of the last month, the left-back revealed he is unaware about his contract situation at Camp Nou, despite being promised a new deal by the club’s former leaders. So far, there has been no progress on that.

Mundo Deportivo now claims the La Liga winners have left it ‘very late’ in extending the 29-year-old’s deal, which has now allowed Manchester United and Juventus to get in touch with his agent, Vicente Fores.

The two European giants have funds at their disposal to sign the Spain international and it’s claimed that the Red Devils are the Turin club have informed the player’s representative that they would be in a position to ‘intervene’ at the right moment. 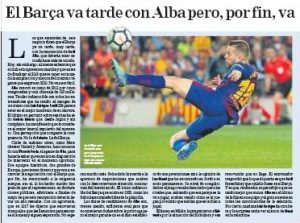 Alba has been one of the standout players for Ernesto Valverde’s side, scoring two goals and registering six assists in all competitions.

With over 18 months left on his Camp Nou contract, Barca will have to move quickly and offer him a new deal before potential suitors could make an approach for him next summer.

Manchester United interest doesn’t make a great deal of sense given the form of Luke Shaw.