There’s normally not much to see in a Rio Ave game. Only 2232 people watched their last league match against Nacional, even though it was an exciting clash which ended with a 3-3 score.

Still Crystal Palace had some interest in this game, because as reported by local newspaper A Bola, the London side have sent scouts to attend to the match.

The match had one player who really stood out, Carlos Vinícius from Rio Ave. He scored two goals and had an impressive performance creating chances for the home side.

For Nacional, winger Camacho was praised by the local press for seeking goals even when the away side didn’t seem to have a chance to tie the match. 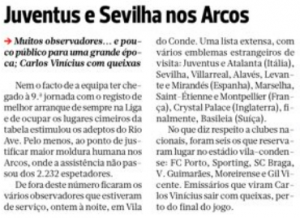 It’s unknown if Crystal Palace had a specific target. Rio Ave are well known for their ties with Jorge Mendes, as the agent frequently moves players from there to bigger clubs, so that could be one of the possibilities.