Two days ago, we covered a ‘Top Secret’ report from Mundo Deportivo, who claimed that Jordi Alba was waiting for a call from Barcelona to renew his contract.

The fullback’s current deal runs down in 2020 and he’d long been promised a new contract by the former sporting leaders of the club.

Lack of movement from the La Liga winners has surprised the defender’s surroundings and there is a growing ‘concern’ within his camp.

Pep Segura, the Spanish champions general manager gave a lengthy interview to Catalan newspaper Sport and he spoke about the 29-year-old’s contract situation at the club.

“We are very pleased with Jordi. We want him to continue. We will talk with him and his surroundings, but is not a necessity that we have because he has two more years of contract,” Segura said.

Ernesto Valverde saw his side part ways with Lucas Digne as the Frenchman made a switch to Everton in the summer and his exit from the Camp Nou has seen the former Valencia man as the only recognised senior left-back in the squad. 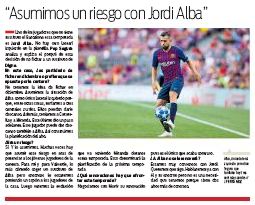