On October 9th, a ‘Top Secret’ report from Mundo Deportivo claimed Jordi Alba is still waiting for a call from Barcelona to extend his contract at Camp Nou.

The left-back’s current deal runs out in 2020 and the club’s former technical secretary, Robert Fernandez, had promised him to offer a new deal.

So far, there have been no communications between the two parties and the situation has led to ‘concern’ and ‘surprise’ in the player’s camp.

Earlier this month, the La Liga club’s general manager, Pep Segura, admitted the Blaugrana are in no rush to tie down the Spain international to a new deal.

Ernesto Valverde’s side face Inter Milan in the Champions League clash on Wednesday and Alba was asked about his contract situation with his current employer during the pre-match press conference.

“I’m very calm, but still I don’t know anything. It is the club who decides,” Catalan newspaper Sport quoted Alba as saying. 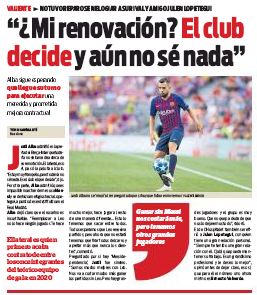 Following Lucas Digne’s summer move to Everton, Alba is the only recognised left-back at Barcelona and considering the form he’s been in this season, it would be best for the club to tie him down to a new deal.