According to a claim in the French media, Leeds United are casting an eye over Amiens forward Moussa Konate.

The Senegal international impressed for the Ligue 1 side last season and has been linked with a move to the Premier League earlier in the window, following claims West Ham United and Burnley were interested. It was reported his club valued him at €15m.

L’Equipe report today Konate is in the viewfinder of Leeds United, along with fellow Championship club Brentford. Despite bringing in Patrick Bamford last week it seems the Elland Road club are still looking to strengthen in attack before the transfer window closes, and Konate looks to be an option.

There are no details if Leeds United or Brentford will be looking to land the player on a loan deal or a permanent move, but it’s unlikely Amiens would accept a temporary switch without an obligation to buy. 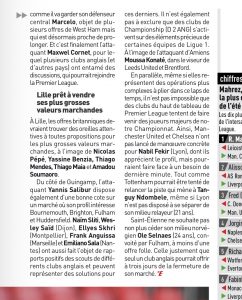 Konate scored 13 goals in the French top-flight last season for Amiens and has been capped 26 times by Senegal.

The player is contracted to the French side June 2021.