Everton were the subject of a series of odd claims from the Portuguese press in the summer about Raul Jimenez.

It was claimed the Toffees had offered €45m for the Mexican striker, and what made the whole thing inexplicable was that Benfica had reportedly said no. With Jimenez being very much a substitute and not a regular goalscoring one at that, it was a surprise they could reject anything like that amount.

The claims continued throughout the summer, with it later being stated Everton were set to put in a new offer of €30m, which didn’t make any sense given the earlier claims, but was at least closer to the player’s actual value.

With Everton repeatedly scouting Benfica this season, the Jimenez links have routinely popped up, and he’s now being edged more to the market. 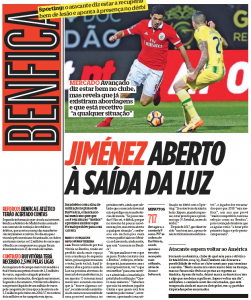 Should any side offer anything like €30m now, it’s got to be a decent bet that Benfica would take it.

This weekend A Bola carry quotes from the player suggesting a move is quite possible, saying he’s “open to any situation” and will try to do what is best for his career.

An Everton move would surely be fortunate.