Home Europe Everton set to decrease offer from €45m to €30m, fits in with...
SHARE

Raul Jimenez’s saga seems to be finally getting to a point where clubs will actually start making bids for him.

Newspaper Correio da Manhã reports today that Everton and West Ham are both preparing offers for the Mexican striker, each of around €30m.

There have already been claims in Portugal of a €45m offer from Everton, so either that was nonsense, or a fresh attempt from Goodison Park at a lower amount is on the way.

That would fit in with the craziness of this rumour, because after reports in Portugal of the asking price dropping from €50m to €40m, it’s now back up again. 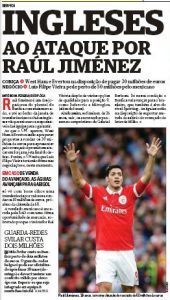 Record said that €40m would be fine, but even that seemed over the top for someone who is basically a bench player.

And in the past few days, it was reported that Benfica must get rid of Jimenez ir order to sign Gabigol, something also mentioned by Correio da Manhã today. The Lisbon side are letting a reserve player go to get a potential starlet on loan, and that’s a move they want to make.

It seems clear Benfica want to sell Jimenez and want every penny they can get out of a deal. Their expectations are unrealistic if anything close to what has been reported, and it’s all getting silly.

Should Everton or West Ham actually offer €30m, that’s easily a good enough fee, which makes it hard to believe the €45m ever went in.