A €45m offer has arrived at Benfica for Raul Jimenez, report Record in their Sunday edition.

The club to have sent the offer is unnamed, but Record make it clear they believe West Ham and Liverpool are the likeliest suspects. West Ham were very strongly linked to Jimenez before the Mexican moved to Benfica.

Whilst Slaven Bilic was speaking positively in a West Ham press conference about signing Jimenez, the player himself was busy actually signing for Benfica, but the London club have continued to be linked with him since.

Record say that Jurgen Klopp still hasn’t finished defining his attack at Liverpool and wants to bring in another option, hence the Jimenez link. Just like West Ham, Liverpool have been linked with the forward at various points over the past few years. 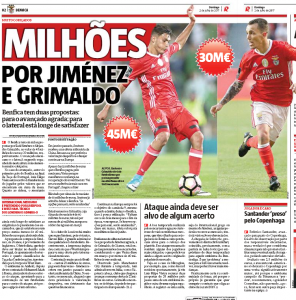 That’s no surprise, €45m overvalues a player who was a substitute option for Benfica last season, and who found the back of the net 7 times in the league.

West Ham would probably be likelier than Liverpool, if they’ve forgiven the 26 year old for turning them down last time.