Home Europe Everton player ‘seemingly on his way out of Liverpool’ – But negotiations...
SHARE

Despite a wave of optimism in the early stages of the week, the Bernard-Robin Olsen deal that has been widely discussed over the past fortnight isn’t going as smoothly as first hoped.

The forward isn’t in Carlo Ancelotti’s plans, while the goalkeeper, currently on loan from AS Roma, appears to be going forward.

That’s why this idea of an Olsen plus cash transfer with Bernard leaving Everton and moving to Italy was mooted, and appeared to be favoured by Paulo Fonseca, who knows the Brazilian from their time together at Shakhtar Donetsk.

But, and it’s a big one, Stephan El Shaarawy is also on the list, and with him seemingly trying to free himself of his contract with Shanghai Shenhua, he would be more accessible, and ultimately cheaper.

Corriere dello Sport have a small update on the matter, claiming ‘the negotiations with Everton aren’t taking off’ despite Bernard ‘seemingly being on his way out of Liverpool’. 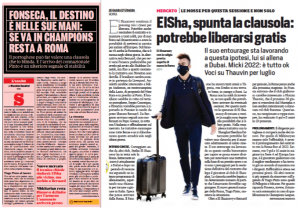 They then mention the dubious rumour of Ancelotti being interested in Felipe Anderson that we will ignore for the time being, but their stance is it would be one Brazilian for the other.

Judging by what Gazzetta dello Sport add to this, El Shaarawy is the ‘closest’ of the two, although it’s worth pointing out Tuesday’s reports stated no decision would be made before the derby against Lazio.

Patience is key with this one.