Tottenham Hotspur have set their sights on Marcel Sabitzer and Spurs interest in the RB Leipzig captain has been regularly discussed in the German press.

Last weekend, we covered claims from Sky Deutschland when the north London club were named as the ‘potential buyer’ for the 26-year-old.

This week’s edition of SportBild once again explains the Austria international is on ‘Tottenham’s wish list’, and the magazine also looks at his and Emil Forsberg’s contract situation.

Both have deals expiring in 18 months and there’s been no progress over extending their contracts beyond 2022. The duo are the top earners at the club, currently collecting €6m per year.

Leipzig chief Oliver Mintzlaff has stressed his side will hold talks with the Spurs target and Forsberg at the right time.

“These players grew up together with us and have made a significant contribution to the success of RB to date,” Mintzlaff said.

“They have become important performers at Leipzig and international players for their countries. As always, we will sit down with necessary calm and time and look for solutions that suit both the club and the player.”

Leipzig have a policy of not letting their players leave as free agents. SportBild, however, explain this is ‘no longer set in stone’. 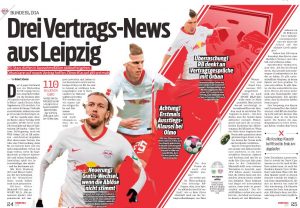 Julian Nagelsmann’s side will not let their men leave if the proposal ‘does not guarantee the club to get an equivalent replacement’.

This could be treated as a warning for José Mourinho’s side and if their offer doesn’t satisfy Leipzig, Tottenham will not be able to take Sabitzer away from the Bundesliga club in the summer.