Frank Lampard’s days as Chelsea coach are ‘numbered’, with the club ‘intensifying’ talks with potential replacements for their beleaguered boss.

That’s what SportBILD report today, saying the Blues have already held talks with several big-name managers about a move to Stamford Bridge.

Lampard has found himself under increasing pressure this season as, despite a huge summer rebuild, his side sit ninth in the table and ten points behind league leaders Manchester United.

The Blues boss’ failure to get the best out of summer signings Timo Werner and Kai Havertz has also caused concern at the club, enough, it seems, to have them contact replacements.

SportBILD report that Thomas Tuchel, Julian Nagelsmann and Massimiliano Allegri are currently the ‘most hotly discussed’ names at the club, while Brendan Rodgers and Ralf Rangnick are also on the list.

Chelsea are said to be looking for a ‘better manager’ who will give the young and highly talented team a ‘clear direction, develop it further’ and ‘lead it to titles’.

They want a boss who will leave his mark on an era, as Jose Mourinho did when he first arrived in 2004, and the hunt is on for that man. First, though, the club have to decide whether to make an immediate change or wait until the summer.

If it is the latter, the ‘desired solution’ is RB Leipzig boss Nagelsmann because he is a ‘promoter and developer’ of younger players.

However, it is not an option for Chelsea to simply give up the season after investing €250m in the summer and risk making the Champions League. Thus, a quick change in manager is considered more likely.

In this regard, contact with Thomas Tuchel, who was also talked to in 2017, has been ‘intensified’ following his departure from PSG. It is believed he ‘fits the profile’ of what Chelsea are looking for. 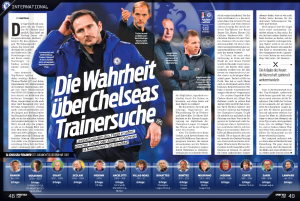 The Blues, though, are ‘holding most talks’ with Allegri, who is considered ‘tactically superb and strong in leading stars’.

Lampard, meanwhile, will be allowed to carry on but he is no longer ‘untouchable’ at Stamford Bridge.

Their current placing is considered a disaster, and the fact he has not improved the team’s style of play despite big purchases ‘weighs more heavily internally’ than bad results.

Now there is ‘no confidence’ in him as a manager, with him labelled as a great guy who can inspire but a ‘mediocre coach’ who lacks a clear plan.

That’s not enough for Chelsea, whose owner has the taste for titles again and wants a manager who can deliver them.