Home Europe Decision in Everton transfer will not be made before upcoming derby –...
SHARE

Another day, another update on the situation between AS Roma and Everton regarding the possible switch involving Bernard and Robin Olsen.

Monday’s round-up was certainly promising, with members of the Italian media stating the Brazilian was ‘more accessible’ than Stephan El Shaarawy for the time being, with the swap blessed by Carlo Ancelotti in the process.

This is echoed on Tuesday, as Corriere dello Sport continue that hope by reporting that while the Italy international would be available on a free because his ‘contract termination’ with Shanghai Shenhua is ‘imminent’, Roma ‘wants to lower the salary by at least one unit’, which we’re guessing means €1m.

However, ‘the problem would not arise with Bernard’, whom ‘Fonseca appreciates’, as it’s already been reported he’d be willing to lower his wages to help Roma.

Either way, a ‘definitive step’ will not be taken before the derby against Lazio, which the Portuguese manager is planning on approaching with a similar squad to the one he used against Inter. 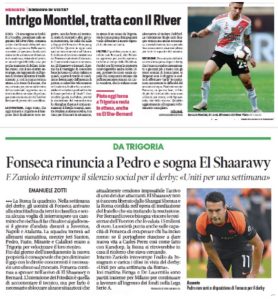 That means no transfer or decision before then, so we’re going to have to wait a while longer before this comes to an end.

On top of that, Il Tempo add their little bit, saying Roma still need to ‘overcome Everton’s resistance’, as they value Bernard at €15m, but we all know the inclusion of Olsen will reduce that by about €6-7m.