Arsenal defender Sead Kolasinac turned down the chance to join West Ham United to make an emotional return to Schalke.

That’s according to SportBILD, who cover the player’s return to his former club and the difference he is already having there today.

Kolasinac returned to his former club earlier this month, agreeing to forego a large part of his salary to aid their fight against relegation.

He’s made an instant impact at the club, with his first appearance of the season coming in the 4-0 rout of Hoffenheim over the weekend, a result which was Schalke’s first league win in a year.

Kolasinac was a key part of the victory but he’s also been quickly working to solve things off the pitch too, with it explained he is the ‘person of respect’ that the team have been missing for some time.

For example, Kolasinac has recently held several talks with star man Amine Harit about his behaviour and ‘appealed to his honour’ to turn the player’s season back around. He responded with a hat-trick of assists in the 4-0 win. 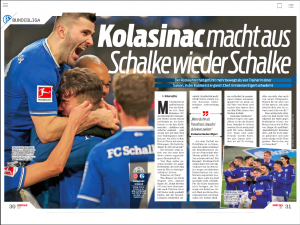 The move for the Arsenal man is quickly looking like an excellent piece of business, but SportBILD say it could have been very different.

They report that at least three English clubs, including West Ham, were all keen on his signature, while Napoli and Roma also showed interest.

Kolasinac, though, ‘decided to take the hard way’ and return to Schalke to aid their battle against the drop instead.

Indeed, the left-back can even imagine a long-term stay at the club in the future, although if he is available, it seems West Ham may among his suitors again.