Liverpool have joined the race for Bayern Munich defender David Alaba, but their chances of securing his signature ahead of the competition are slim.

As you’ll be aware by now, Alaba is out of contract at the end of the season, and there is no sign of him signing a contract extension at the Allianz Arena.

As a result, he’s been linked to every major club in Europe, with numerous thought to be in the hunt for his signature.

Liverpool have been named among them as they continue their hunt for a new centre back following the injuries to Virgil van Dijk and Joe Gomez this season.

SportBILD back up their interest today, stating that Liverpool are one of six clubs to have approached Alaba’s father George and his agent Pini Zahavi.

The Reds are the ‘latest to enter the poker game’ for the centre back, with Manchester United, Manchester City, PSG and Spanish duo Barcelona and Real Madrid all having been in contact too.

Liverpool, however, ‘see little chance’ of actually completing the signing given the competition and are already looking at alternatives. 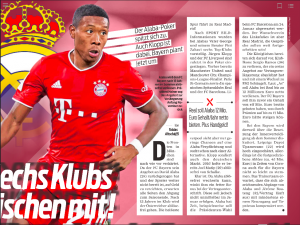 Jürgen Klopp is believed to be ‘exploring the German market’ in that regard, looking for another bargain like the one he got with Joel Matip in 2016.

Alaba, for his part, is expected to end up at Real Madrid as they are his preferred club and talks with the Spanish giants are at an advanced stage.

What he won’t be doing is staying at Bayern, who withdrew their offer in November and Alaba’s high demands and now expect him to leave come the end of the season.