On July 13th, we covered a claim from Catalan newspaper Sport that Everton are interested in Lucas Digne, and an offer would be accepted by Barcelona if it came close to the €16m asking price.

Then on July 17th the same newspaper said Barcelona just wanted something ‘exceeding €16m’ which is usually code for ‘something close to’.

On July 19th, Mundo Deportivo reported Everton were pushing the most to sign the French fullback and that an offer of around €16m would be considered a ‘good deal’.

Today’s edition of Mundo Deportivo reported Barca wanted to get back as much as possible given they’d paid €16.5m plus €4m in bonuses, and, whilst interest was further backed up, it was stated Everton were reluctant to pay such an amount.

So imagine our surprise at an article from the Daily Mirror which claims Everton have already offered €25m. Not just that, it’s stated they’re willing to pay it upfront and then add bonuses on top of the figure too. 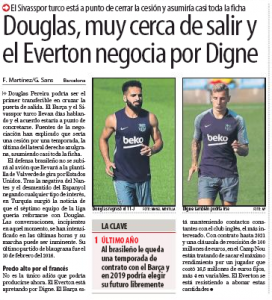 Lucas Digne would possibly be gift-wrapped in the finest blaugrana paper and sent off to Goodison Park holding a Messi goodie bag.

Joking aside, if the claim isn’t accurate it could hurt Everton’s attempts. Should Barca believe this is an indication of Everton being prepared to pay over the odds, coupled with the Richarlison blockbuster, they may think €16m isn’t ambitious enough.

It’ll be interesting to see what the next development is.