Today’s edition of Catalan newspaper Mundo Deportivo once again claims Barcelona are hoping to offload a few of their fringe players before they fly to the United States for their preseason tour.

One of the players that is close to leaving the club is Lucas Digne. At Barcelona, the left-back is considered surplus to requirements and he’s said to be considering an exit now too.

Having started only 13 matches in all competitions, Digne lost his place in the France squad for the 2018 World Cup. He was disappointed to not make it to Didier Deschamps’ squad, who won the tournament in Russia.

Everton are now viewed as ‘pushing the most’ for the player’s transfer. An offer from the Premier League club ‘can be’ around €16m which would ‘be a good deal’. 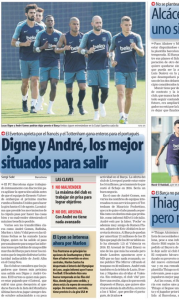 The claim around the offer is a little vague, not absolutely stating it’s been made but giving a suggestion it exists, or will exist, in some form.

Mundo Deportivo also report that Everton are one of the clubs to have Andre Gomes ‘in their orbit’.