Home Championship Wolves star happy to stay at ‘spectacular’ club, and be ‘cherished’ by...
SHARE

Ruben Neves’ stay at Wolverhampton Wanderers for the next season is that typical situation which club fans consider as ‘a new signing’.

Having arrived from FC Porto last year in a €18m deal, the midfielder was crucial for Wolves’ Championship title campaign last season, turning out to be the face of the club’s new era.

His performances have obviously linked him to Premier League clubs, with some strong rumours saying he could be joining Liverpool this summer.

But Neves is staying, and talked about his decision with his home country’s press this week. Many Portuguese journalists have been following Wolves’ preseason preparations, and the midfielder has given them a long interview, which is featured in today’s edition of O Jogo. 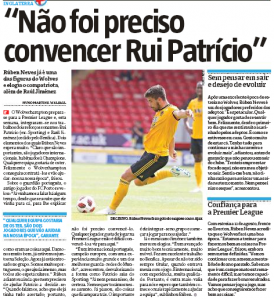 On his first season at Wolverhampton, Neves said: “It’s spectacular. Any player likes to feel good. Fortunately, from the first day I felt very cherished by the fans. It’s like you’re at home. I really like being here. I have everything to continue my career and evolve more.”

He also guaranteed he didn’t even consider leaving the club this summer: “I always tried to be focused here, it wasn’t my goal to leave. I felt good, I had no reason to risk an exit right now. I didn’t even think about it.”