Aksam report West Ham’s €22m bid for Vida has been rejected by Besiktas as their president Fikret Orman is looking to get at least €25m for the player.

According to Aksam, Orman is currently in England for talks with clubs interested signing Vida, and he’s hoping he can get a little bit more for the Croatia international.

The Turkish newspaper claim Vida has told Besiktas that he wants to leave the club, and has stated he wants to continue his career in the Premier League next season.

Besiktas are unlikely to stand in Vida’s way and Aksam say the player is looking even more likely to leave in this transfer window. 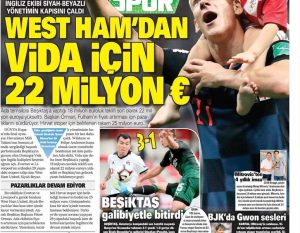 Liverpool and Everton are said to be interested in Vida, as has also been claimed previously in the Turkish press, but Aksam say the most serious offer has come from West Ham.