Having arrived at Manchester City from Eredivisie side PEC Zwolle last summer, Philippe Sandler was restricted to just two appearances, in cup competitions.

Three days ago, we carried a report from Het Laatste Nieuws, who stated Anderlecht are interested in taking the 22-year-old on a season-long loan deal, but there were no additional details.

Another Belgian newspaper, Het Nieuwsblad, brings the latest developments as they claim the defender will join Anderlecht on a temporary deal for the 2019/20 season.

Kompany left the Etihad after his contract expired this summer and was appointed as the Jupiler Pro League side’s player-manager.

He has several options in the centre-back position and with his role of a player-manager, can deploy himself in the heart of the defence. Sandler can be deployed in the defensive midfield position.

The Belgian’s desire is to play with a lot of offensive players and for that he will need a physically strong player in the holding midfield position. 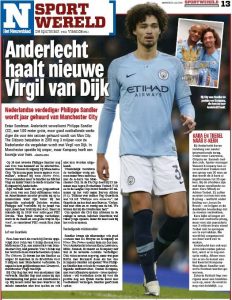 The report claims Sandler’s signing can give Kompany that option.