If Corriere dello Sport are to be believed on Monday morning, then Tottenham are extremely close to signing Nicolo Zaniolo from Roma.

In need of a centre-back, the Italian side have been looking at a number of players around Europe, among which has been Toby Alderweireld.

We already relayed claims of Spurs offering a sum of money + the Belgian defender to try and acquire the young Italy international, but nothing had been accepted.

Until now, that is, as Corriere explain Tottenham came back with an improved bid, one of €23m + Alderweireld, to which Roma gave their OK.

The centre-back, helped by an English lawyer and the same agent as Zaniolo, has also agreed to the move, meaning three out of four parties (or 75%) are in agreement, with just one step to overcome: convincing the 20-year-old. 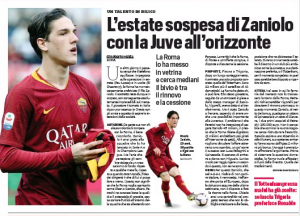 For now, the attacking midfielder is the one holding a transfer up, aware of Juventus’ interest (his favoured destination), but the Serie A champions have ‘no intention’ in paying €45m for the player.

Having lost Kostas Manolas to Napoli, Roma would be able to guarantee Alderweireld first-team football, as the competition is a little bit less fierce than in London, where the 30-year-old has to compete with Jan Vertonghen and Davinson Sanchez week in week out.

Perhaps that’s why he’s prepared to sacrifice Champions League football for guaranteed time on the pitch.

Either way, until Zaniolo says yes, this won’t go through, so it’s up to Daniel Levy and co. to convince him.