Monday’s edition of Record has Ruben Vinagre plastered across their front page, and there’s a lot of confidence that he’ll soon be moving to Sporting.

Having spent time at Famalicão on loan last season, the 22-year-old managed to impress and catch the attention of Portugal’s biggest clubs. Sporting have been the strongest candidate for months, although Benfica were dragged into the picture at one stage.

Record say there’s ‘already an agreement with Wolves’ and state there’s just some details to confirm before the move can happen. So confident is the newspaper that Vingare will be moving to the green side of Lisbon, they say ‘guaranteed’ on their front page as well as a further three times in the accompanying article. 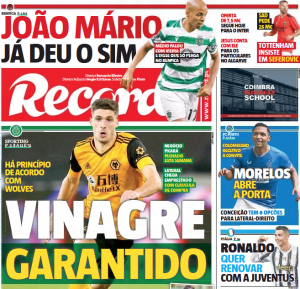 Wolves are said to have given approval to the move and it will on the basis of a loan. There’s likely to be a buying clause, although it’s not known whether that will be mandatory or optional.

The transfer is expected to be made official soon, and Vinagre will then be a Sporting for the foreseeable future.