Haris Seferovic has been linked to Tottenham for quite some time.

They were already linked last summer, when Jose Mourinho was looking to sign a striker on loan for Spurs. With attention turned to Benfica, the Premier League club considered both Seferovic and Carlos Vinicius, with a deal for the latter later being agreed.

Monday’s edition of Record points out they’d already reported this, says Tottenham ‘insist’ on the player, and then takes claims from Italian journalist Rudy Galetti.

On Sunday, he claimed: ‘#Seferovic’s future could be in the #PremierLeague: #Tottenham are interested in the #Benfica striker (evaluation around €25M): #Spurs are thinking about making an offer. Evolving situation.’

Record’s take on this is that these claims were always likely to return after the player scored three goals at Euro 2020. Benfica now wouldn’t accept anything other than a sale at €25m or above. 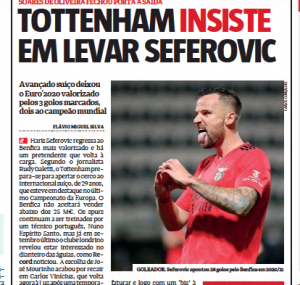 The Lisbon club have already made it clear they’re not actively looking to sell their key players this summer, and Seferovic would be in that category. With a contract lasting until June 2024, there’s no pressure on Benfica in that regard, and the player also has a buyout clause of €60m.

That said, something around €20-25m would surely tempt them at least a little.