Saturday saw reports come from France stating Marseille and Arsenal have finally agreed a deal for the transfer of Matteo Guendouzi.

The midfielder spent last season on loan with Hertha Berlin and had a mixed time with the Bundesliga club. This summer, Marseille had been linked repeatedly and around a month ago it was stated the Arsenal owned man had already found a personal agreement with the Ligue 1 side.

Then followed difficult negotiations between the clubs, with a loan and a compulsory purchase option the basis on which a deal has been agreed. That’s simply just a deferred permanent transfer, with Marseille then able to count the move on next year’s accounts.

Guendouzi had been expected to arrive in Marseille on Monday, yet today’s L’Equipe explains he actually turned up yesterday, clearly keen to get the move done. 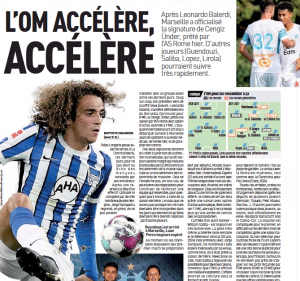 According to the French newspaper, the option will be set at €11m. Earlier reports indicated there’d also be a €1m loan payment, so it’s a €12m deal for the Gunners.

Marseille’s efforts for William Saliba, also on a loan deal, are said to be on track, although not moving forward as quickly as Guendouzi.