Martin Terrier was linked with Everton in both the winter and summer transfer windows.

Back in January it was reported by L’Equipe that Everton and West Ham were keeping a close eye on the right footed forward and his progress for Lille.

In the same month there were claims of Everton scouting the player, and the interest seemed to be carrying on, at least to some degree.

Towards the end of June, L’Equipe, who had started the whole thing, said Everton were ‘ready to go on the offensive’ for Terrier, as Ronald Koeman looked to add to his squad.

Nothing came of it, no transfer anyway, but he’s certainly been progressing, and justifying at least some Everton interest.

Monday’s edition of L’Equipe highlights Terrier’s progress, the 20 year old is now on loan at Strasbourg, and the French newspaper states: ‘He is not the most gifted player of his generation, a precocious champion like Ousmane Dembélé or Kylian Mbappé. But Martin 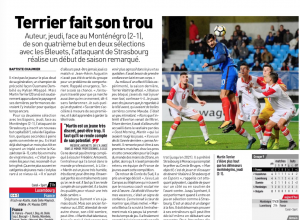 Terrier (20 years old) suddenly appeared on the landscape and his last performances should install him there for some time.’

Impressing for France’s U21 side, and scoring a goal just after coming on against Montenegro, Terrier is receiving more attention.

Should Everton still be keen, and it would be odd for them to drop their interest just as Terrier starts to become more prominent, then it’s progress that will please the Goodison scouts, and justify the club following him.