Martin Terrier’s progression at Lille over the past few months has caught the eye of recruiters in the Premier League, reports L’Equipe on Saturday.

Just giving the story a tiny little snippet, the French newspaper claim Everton are ‘willing to go on the offensive’ to sign the 20 year old forward.

A little digging led us back to January and claims from the same French newspaper that Everton and West Ham were keeping an eye on the player. Fiorentina were also linked but a move during the winter window was thought to be unlikely.

Not long after, it was also claimed in France that Everton had scouted Terrier on at least three occasions. 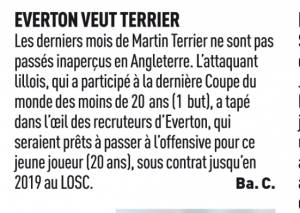 Now, L’Equipe make it sound like things have progressed from that stage, and Everton are prepared to do something meaningful about their interest.

Terrier is a right footed forward, who can play through the middle, supporting a more conventional striker, or out wide.

He hasn’t yet managed to build up an impressive record of statistics, and with 18 now being the new 20, Everton fans may be concerned that Terrier is still yet to fully break through at Lille.