Each international break, Barcelona’s transfer guru Robert Fernandez goes off watching matches, and then for several weeks afterwards the Catalan press try and work out who his target was.

Mundo Deportivo have decided that one of the men Robert is keeping an eye on is Danilo Pereira, Porto midfielder. Robert watched the player for Portugal against Andorra, not the greatest of tests, and believes Danilo is a ‘defensive pivot of great potential’.

Barcelona are looking for a player who can provide Sergio Busquets with rest opportunities, and Danilo is a candidate.

However, there’s competition. Arsenal, Manchester City and PSG have all noticed the player’s ‘great qualities’, and would be considering moves themselves.

Also a problem is that Porto would likely ask for a very big fee, perhaps over €50m, which may be acceptable for Arsenal, Manchester City or PSG if they want a starting option, but surely wouldn’t be what Barcelona want to pay for a back-up player. 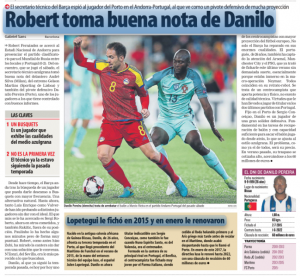 Manchester City are perhaps the English club most linked with Danilo, more than Arsenal anyway.

Towards the end of August it was reported in Portugal that Manchester City were making a ‘diplomatic approach’ for Danilo, going for long term gain.

The club did similar when signing Fernando from Porto, and their respectful transfer tactics received much Portuguese praise at the time.

That approach, combined with a big fee, could see Manchester City have the advantage over Arsenal, PSG and Barcelona.