A few months ago, when Matheus Pereira’s success for West Brom started getting noticed, the midfielder was linked to Manchester United.

The rumours didn’t gain a lot of strength, because the Brazilian is having a loan from Sporting, and that would complicate things for the Red Devils to get him.

Now Pereira has made 30 appearances for the Baggies, allowing the Championship side to trigger a contract clause and get him for €10m on a permanent deal.

That was the subject of an interview he had with Portuguese newspaper Record this week. And it turns out that the move to Manchester United was also the subject of a couple of questions. 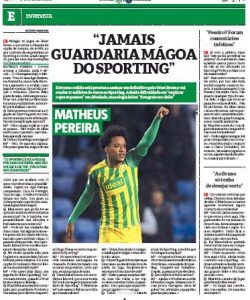 First asked if he or his agents have received any contact from the Red Devils, Matheus Pereira said: “I’m focused on the moment that I’m living here. I don’t really like watching news or reading newspapers. I’m always focused on training and games. It’s my goal. I try to stay as much as possible on the margins of everything that runs outside.”

Then it was mentioned that he could meet his former Sporting teammate Bruno Fernandes at Old Trafford.

“Right now, I’m right here and happy. I still have a contract with Sporting… To Bruno I only wish him luck. He’s a great player. He went to a big club and has everything to go well.”

Matheus Pereira has six goals and 16 assists in 30 games for  West Brom so far. The Portuguese press recently said there’s a four-year contract waiting for him at the Baggies.