Exactly one week ago, Portuguese newspaper A Bola published an article saying Sporting CP are looking for a player to replace William Carvalho at the club.

The Lisbon side would be keen on selling the midfielder for at least €35m, and the outlet recalled Arsenal and West Brom were once interested in signing him.

But opinions change fast, and today, as Sporting prepare themselves for the derby against Benfica, A Bola has another special story on Carvalho. However, when talking about his transfer situation, it’s claimed the club will try to keep him during the transfer window. 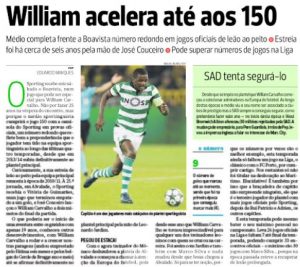 It’s recalled that Sporting have already turned down a €30m bid from West Brom for the player last summer, and they say that Carvalho is now a Pere Guardiola client has made the English press link him to Manchester City.

But as covered by us many times, the Manchester City links, just like the West Brom ones, started in Portugal. That’s just one of the many things that are not right.

Maybe A Bola changed their verdict when Sporting president Bruno de Carvalho said €30m won’t be enough to pay for the player’s boots this week. And if that’s the case, it’s clear A Bola are pretty lost.

It’s also obvious saying a player is not for sale can make him more valuable. We know that, Bruno de Carvalho knows that… does A Bola know that?