Sporting CP president Bruno de Carvalho hasn’t been very inviting to clubs who want to sign William Carvalho in the next transfer window.

Speaking to TV Zimbo on Monday, the president was asked about a potential sale and said (via A Bola): “City? €30m? I should send the boots. For €30m I send William’s boots. And without the studs.”

It comes as a response to rumours from last week, which said Carvalho could be available for only €25m in the next window. 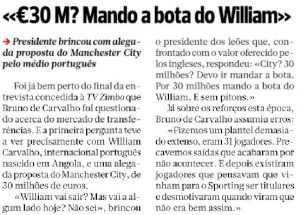 Once again the club most linked was Manchester City. The rumours really started when the player broke his deal with Jorge Mendes and started working with Pere Guardiola, Pep’s brother.

Linking him to Manchester City sounds too obvious, especially because Carvalho hasn’t proven he could improve Pep Guardiola’s side. The rumours about a move to Everton, Leicester City or West Brom from last year sound more plausible, and we could see one of these clubs trying for him again soon.

Bruno De Carvalho talks a lot and just because he’s said €30m, about £25m, isn’t enough doesn’t mean that’s actually the case. For Manchester City, or anyone else.