The player, who used to be a client of Jorge Mendes’ Gestifute, now has his career managed by Pep Guardiola’s brother Pere.

Carvalho won Euro 2016 with Portugal and is highly rated in the country, so has been unsurprisingly linked to a Premier League move for quite some time now. 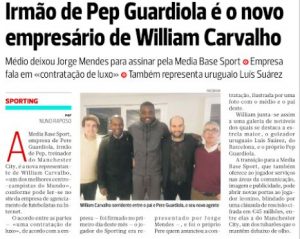 The midfielder currently has a €45m release clause, and recent reports have suggested that Sporting would be happy to take that money soon.

So this Friday, two days after the deal’s announcement, A Bola came up with a story reporting it.

‘Pep Guardiola’s brother is the new agent of William Carvalho’ says the headline.

Then they say there are many ‘sharks’ keeping an eye on Carvalho. And at the end of the text, the newspaper claims this deal with Pep Guardiola’s brother could end up opening doors at… Manchester City.