West Brom have been courting Georges-Kévin N’Koudou, according to claims from France on Tuesday. The 22 year old left winger has failed to really make a mark at Tottenham and a move away from the club is likely the best step to take.

It had been considered that N’Koudou returning to France was a likelier option, and there have been several clubs interested from Ligue 1, but the player is convinced he has a future in English football.

West Brom would have had to take the player on loan, but L’Equipe believe Burnley are now likely to beat the Baggies to it. There’s every chance it’s actually West Brom who 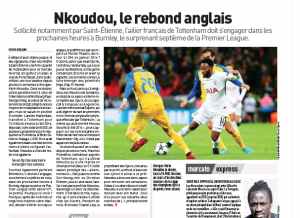 have walked away from the potential transfer, with only a loan on offer for the player and no option to buy in the summer.

Alan Pardew may be looking for a more long term solution, rather than helping a fringe Spurs player find his feet in the Premier League… only to then see him return should he manage to shine for West Brom.