Everton, West Ham, Southampton and Watford are all making serious efforts to sign Nico Gaitan from Atletico Madrid during the January transfer window.

Gaitan is available to move, with it not yet being entirely clear whether he’ll go on a permanent transfer or a loan.

Marca report on Tuesday that two of Everton, West Ham, Southampton and Watford are looking at a permanent transfer, whereas two of them would prefer a loan. Unfortunately, the Spanish newspaper don’t say which two are which, leaving at least a little mystery.

All, however, are presented as being especially keen and ‘knocking on the door’ for a transfer. West Ham manager David Moyes was linked when manager of Manchester United, and Watford’s Marco Silva will know the player well from his time in Portugal. 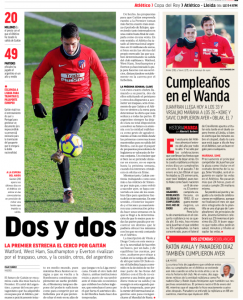 Gaitan doesn’t immediately look like a Southampton type of buy, but they may want to improve quality on the wings, which could be attracting Sam Allardyce at Everton too.

As for price, Marca state it should be around €20m, although the market will dictate what Atletico can get.