Timo Werner is very much the man of the moment in Germany. In his last four games, two for the national side and two for RB Leipzig, the striker has scored 6 goals.

At the age of 21, it makes him one of the hottest talents in European football, and given some of the prices paid during the summer, it also makes him very valuable.

Werner has granted an interview to SportBild, and the German magazine have tried their very best to get some transfer hints out of him. As Werner dodged the questions as well as he does defenders, SportBild kept ploughing on until they got the kind of answer they were looking for.

If Werner is to leave RB Leipzig then he wants to do so for a big club with genuine title winning prospects, and when asked to name some of these clubs, the footballer said: “In Spain there are a maximum of three clubs with Barça, Real and Atlético Madrid. In England there’s more: Arsenal, Chelsea, Tottenham, Liverpool, Manchester United and Manchester City.”

Werner had also spoken about Liverpool earlier in the interview, when quizzed on teammate Naby Keita agreeing his transfer: “There’s no anger to him. Liverpool is a big club with a great stadium and super fans, plus it’s a huge transfer.” 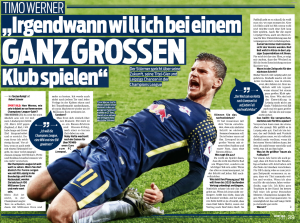 Linked with Jurgen Klopp’s men previously, Werner isn’t a new name for the Anfield faithful, but the chance may have passed.

Werner could already be out of Liverpool’s reach, with the assumption in Germany being he’ll end up at Bayern Munich. When asked about the Bavarian club, the striker said: “FC Bayern is also a big club, but for me it is not a topic that I am concerned with.”

SportBild got what they wanted, some hints at a possible transfer, and Liverpool got some compliments from the Bundesliga star.