Thomas Delaney is having the best period of his career so far. Everything is going the Werder Bremen midfielder’s way, and he’s picking up fans around Europe.

Four goals in two matches for Denmark were then added to with a Man of the Match performance, and goal, for Werder Bremen against Hertha Berlin at the weekend.

Delaney only joined the German club in January, but was wearing the captains armband against Hertha, and it seemed to fit well.

SportBild suggest he could be closing in on a move to the Premier League. Tottenham are thrown into the mix, which is an interesting twist on previous links.

Spurs haven’t really been one of the clubs linked with Delaney, during the summer it was Burnley and Brighton, and Everton hold a long standing interest.

Everton tried to stop Delaney’s move to Germany, by offering Werder Bremen a quick profit. FC Copenhagen agreed a deal with Werder last summer, with Delaney then scheduled to move when the winter window opened.

Not wanting to miss out, Everton made an offer, but were knocked back, and Delaney didn’t push for it too hard, believing the Bundesliga to be a good step. He’s been spot on, and should Everton return there’s a good chance he’d be keener, but he’d also be more expensive. 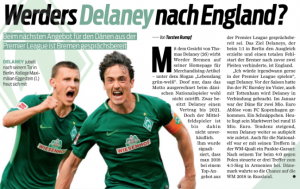 At 26 years of age, Delaney isn’t a young talent, but he is an increasingly established Bundesliga star who has taken a huge step in the past nine months.

Tottenham interest would be no surprise, especially with SportBild saying his market value is around €15m.

Delaney is a traditional central midfielder, and surely wouldn’t join Tottenham or Everton to spend the majority of his time on the bench. The Denmark international would take some convincing he’d play an important role, and whilst Mauricio Pochettino is good at such chats, according to several players who have recently joined Spurs, it’s hard to see a big spot for Delaney within the team.

Perhaps Ronald Koeman, or one of the player’s other Premier League admirers, would find it easier.