Mesut Ozil leaving Arsenal in June remains a very realistic outcome, and SportBild explain in their magazine this week there’s been no renewal talks since February.

Doubt over the future of Arsene Wenger helped stall talks, but despite other claims of renewal offers being made, SportBild say there’s been no new effort since talks at beginning of 2017.

Whilst the Catalan side have been repeatedly linked with Ozil, and that’s a situation likely to continue, the idea of him swapping the Emirates for Old Trafford would be a rather more sensational one.

In March of this year, Ozil’s autobiography detailed a big row he had with Jose Mourinho when the pair were at Real Madrid. The now Manchester United manager wasn’t happy with his player, and made it clear.

As the German international stormed off, Ozil claimed Mourinho said: “You know what, Mesut. Go ahead and cry! You’re such a baby going to take a shower. We do not need you.”

That doesn’t mean the two men fell out, Ozil also said “I love Mourinho actually,” and explained he came to learn the manager was right, and ended benefiting from the tough treatment. 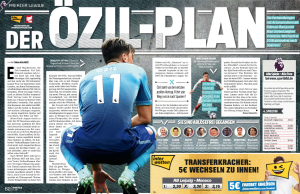 It would be hard to see how easily Ozil fits into a Manchester United team which still looks like it could do with more genuine width at times, but the chance to get one over on Wenger, and sign the German on a free transfer, would be tempting for Mourinho.

Or linking Manchester United, could all be part of the ‘poker’ SportBild say is ongoing over Ozil’s Arsenal renewal.