Nabil Fekir came close to joining Liverpool last summer, but the deal collapsed and he ended up staying at Lyon.

The 25-year-old’s contract with the Ligue 1 outfit will expire at the end of next season and the weekend edition of Le Parisien claims he wants to change clubs in the summer transfer window.

It’s claimed that Tottenham Hotspur ‘would be interested’ in the World Cup winner.

Le Parisien doesn’t mention any additional details like the price tag for the potential transfer or if the midfielder is keen on joining Spurs.

The French newspaper takes a look at those Lyon players who ‘could go’ in the next window and the playmaker is included on the list.

Mauricio Pochettino’s side may view Fekir as a replacement for Christian Eriksen, if the Dane decides to leave the north London club after the Champions League final. 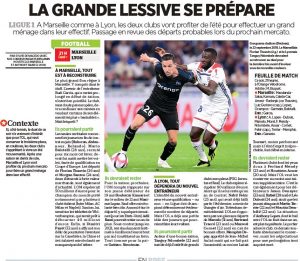 The former Ajax man will also have a year left on his contract at Tottenham and Real Madrid are reportedly believed to be keen on signing the Spurs star.

These aren’t strong claims from Le Parisien, and are part of a transfer round-up, so any interest would likely be at the very initial stage for now.

Fekir has scored 12 goals and registered nine assists across all competitions this season.