The front page of today’s edition of Sport reads ‘Griezmann for Coutinho’ and it’s further stressed the forward’s arrival will ‘activate’ the departure of Philippe Coutinho.

The Blaugrana have already decided for weeks that they need the World Cup winner and the Catalan newspaper explains he will leave Diego Simeone’s side after this season.

Los Rojiblancos star has a release clause of €200m that will drop to €120m from July 1st. Sport explains Ernesto Valverde’s side are not willing to wait util his price drops, which is why they want to negotiate a fee with Griezmann’s employer for his transfer.

Atletico are also open to listening to offers for the player in order to get him off their wage list and the Frenchman’s move to Barca will push Coutinho out of the club.

It’s claimed the ‘divorce’ between the Brazil international and the La Liga winners has reached a ‘point of no return’. The latter are planning the future without the 26-year-old as his exit operation has already been activated.

Barcelona paid €120m plus €40m in variables to Liverpool in 2018 and their idea is to not have a negative balance, which is why they are looking at a fee of around €130m that includes fixed and variables for the former Reds star.

Sport states Chelsea are the ‘strongest candidate’ for the South American, but the Blues need to wait for the verdict from the Court of Arbitration for Sport (CAS) over their transfer ban.

Barcelona are also aware that potential suitors will not meet their asking price for the midfielder and his performance this season only makes it more difficult for them to receive an offer of €130m. 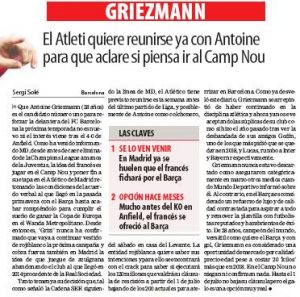 There is no mention as to what will happen to Coutinho’s case if Maurizio Sarri’s side are not allowed to make new additions in the summer and if he ends up staying at the Camp Nou, will they still make an approach for Griezmann?

These two questions are not answered in Sport’s report.

On May 13th, Cadena Ser reported that Atletico and people ‘very close’ to Griezmann believe the attacker will join Barcelona and that’s once again relayed by today’s edition of Mundo Deportivo.