Two days ago, COPE reported that Real Madrid have identified Tottenham Hotspur’s Christian Eriksen as a player to replace Luka Modric at the Santiago Bernabéu.

The Danish star’s contract at the north London club runs down in 2020 and his employer have already tabled a new offer, which is as ‘important’ as the one they gave to Harry Kane when he last signed an extension.

Eriksen is yet to accept Spurs’ offer and it’s claimed that it’s not a coincidence the former Ajax star has not put pen to paper on the new proposal and that Madrid interest is being pushed.

Mundo believes the longer he refuses to commit his future to Mauricio Pochettino’s side, the closer he could get to making a move away from the Premier League outfit for a reasonable price. 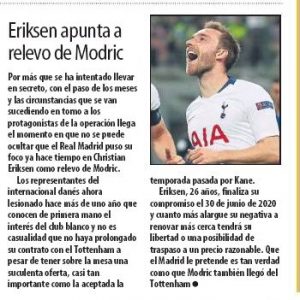 Today’s report once again pinpoints the current situation points Eriksen to Real Madrid and he could be a replacement for the Croatian midfielder, who also moved to the La Liga club from Tottenham.