Barcelona had identified Matthijs de Ligt as a priority target for the summer, but have made a ‘radical’ change of plans and the Ajax defender is now a target that is ‘urgent in January’.

According to a story starting on the front page of Sport, the La Liga winners’ technical secretary Eric Abidal and general manager Pep Segura watched the player in action during his side’s 1-1 draw against Bayern Munich in the Champions League.

The two leaders of the Camp Nou were impressed with his display at the Allianz Arena and doubts in their mind if the player is ready for the present were cleared because of his performance in Germany.

Samuel Umtiti is sidelined with a knee injury and the club are waiting to find out how the centre-back is reacting to the conservative treatment. If the defender is operated on, then he will be out of action for four to five months, meaning he will miss most of this season. 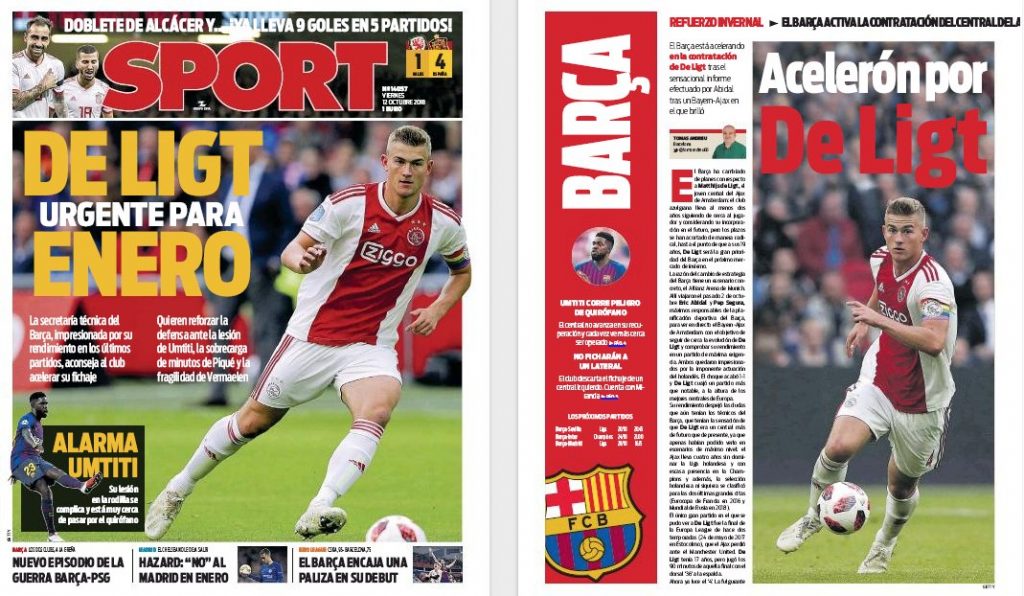 Should the Frenchman not be available for selection until 2019, it will only increase the workload on Gerard Pique, while the other two options available for Ernesto Valverde are Clement Lenglet and injury prone Thomas Vermaelen.

For this reason, Barcelona want to complete the deal for De Ligt ‘as soon as possible’ in order to avoid competition from other clubs, and they know his price tag is only going to rise if they wait until the end of the season.

The current price tag for De Ligt is estimated at €35-€40m, a figure that is considered ‘appropriate’ and the good relationship between the Spanish champions and Ajax could see the operation of bringing the teenager to Camp Nou move forward to January.